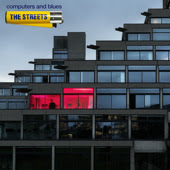 With the Deluxe version of The Streets fifth and final album titled Computers and Blues - due out on 7th February, for just £1 more than the standard you'll get 2 extra tracks In The Middle and Lovelight.
I'm so pleased that Lovelight has made it to the album after-all, it is the wayney vibes (Wayne Bennett) track -

"I've got to give you to... Mr Michael, he has some lyrics for you"

- of awesome proportions. Or as Mike told me back in April 2009 on twitter Re: Lovelight ...

"The Lovelight of my life, is 82% water, it's a mystery being mortal, as much water as I can drink, I know is good but unfortunately it's taste is of small interest, sipped in a boring ritual, if I walk an hour to drink, after walking countless minutes, I think it's the same drink but my gosh this water taste's of silk".... So Skinner, so excellent!

Mine is on order and you can Pre Order the 16 track Deluxe version of Computers and Blues now for an expected delivery on the release date of 7th February 2011.