***an english corner*** video short by Mike Skinner - The Ashes

Mike Skinner justifies a beautifully worded report from The Guardian Sports writer Mike Selvey as the subject matter for his latest video creation titled ***an english corner*** on The Beats official youtube channel.
Mike Selvey is the Guardian's cricket correspondent. He played three times for England, and famously dismissed Roy Fredericks, Viv Richards and Alvin Kallicharran with his first 20 balls, finishing with 4 for 41, in his first Test against the West Indies in 1976. Today, on 7th January Mike Selvey wrote this piece as part of his England Ashes victory over Australia report.

"They came in their thousands to form an English corner of a foreign field for the climax, a day of days in the history of the England team and another one of abject misery for a once-proud Australian team fallen on hard times. Not even the snap showers washing in to interrupt play, and a flatness to the team on the field, could deny them a third overwhelming victory which came, by an innings and 83 runs, at 11.56, four minutes before the Shipping Forecast, and just as Billy the Barmy Trumpeter was playing a poignant Last Post for the demise of Australian cricket." by Mike Selvey

At present, Mike Skinner is not only busy making excellent video shorts, he also brings us Casting Down Your Pod, on a weekly basis, he has a new single titled Going Through Hell out on 31st January and the highly anticipated new album Computers and Blues due out on 7th February of which he will be taking on the road for the Computers and Blues Tour kicking off at the Edinburgh Picture House on 18th February and rounding off at the O2 Brixton Academy on 5th March.

In the video ***an english corner***, Mike Skinner, a handsome young Englishman, is heard reading from his corner a paragraph from Mike Selvey's report in today's Guardian, no newbie to cricket, back in May 2009 Skinner was sat in the sun at Lords watching the 1st Test.
One assumes Skinner has just enjoyed his beverage from the white Audio Engineering mug which he bought back from his visit last November to the 129th Audio Engineering Society convention in San Fransisco where he also met Timberland's mix engineer Jimmy Douglas, fell in love with an Electric Harp and bought a new Burberry jacket.
On learning the victorious news that England has won the Ashes over Australia, he falls into a dream with the sound of rejoicing so near you are nearly there as he tells the news, and then, suddenly, he wakes "WHERE AM I?" he calls, was it a dream? Surreal. 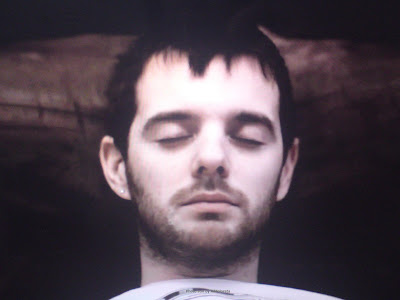 Congratulations to England's glory. Thank you Mike Skinner for a beautiful tribute.