Mike Skinner talks about The D.O.T

The Streets fans and all good music lovers have been watching and listening as The D.O.T has been unveiling itself in samples and experiments since June earlier this year when The D.O.T mysteriously crept in the back door of TheBeats YouTube channel with a beautiful blast of i make loving fun .
The vocals are powerful, the lyrics are meaningful and the beats are bursting with passion, I wholeheartedly love it and I'm very excited to hear we will be getting an album in the near future. 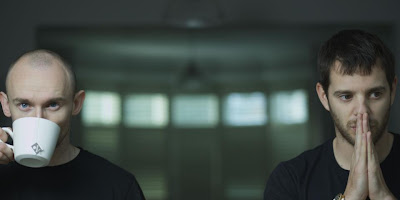 In August, LikeTheSound reviewed some of it's favourite creations from The D.O.T right here ...

The D.O.T is the ultimate collaboration one could wish for, consisting of Mike Skinner (FKA The Streets) and Robert Harvey (The Music) with 15 demo's already uploaded on their website The-Dot.Net
Yesterday, Mike Skinner spoke to The Guardian's Caspar Llewellyn Smith, saying "his new collaboration with ex-Music frontman Rob Harvey is based on a shared love of tea". The D.O.T's Facebook page says "The D.O.T. is making a propa album. The D.O.T. is Rob and Mike. The videos are experiments and a work in progress. They are inspiring the songs that will eventually be on the record. This is happening. We are very excited"

"It's hard to speak for both of us but we have a very similar work ethic and love for high quality tea. Teapigs make some of the best. We are not endorsed by Teapigs, however, but I am by Ocktatrack, which is the loop-based musical instrument I will be playing when we perform live next year. It's like one of those buddy movies from the 80s where the dream is impossible until they both make each other see things in themselves that they previously didn't know.
"I love moombahton, which is why a few of the tunes ended up being 108bpm, and Rob loves ballads, which is why some of them are 85bpm. We both love the Weeknd mixtape but not so much the stuff he did since then.
"The lyrics I write tend to be bits of regurgitated Raymond Chandler and the lyrics Rob writes tend to be either uplifting or not but never in between.
"I love film lighting and Rob loves kung fu."
My favourite track from The D.O.T so far is way our there with Weapon Of Choice, it is a wonderful mixture full of haunting, eery and far eastern beats, blessed with those unmistakable vocals.

The D.O.T is receiving a lot of loving all over the Internet right now, so if you haven't already

Email ThisBlogThis!Share to TwitterShare to FacebookShare to Pinterest
Labels: Mike Skinner, The D.O.T

Get the latest  news on Beyoncé's Official site .