Sway moves up another top-notch gear on the remix to his smash Still Speedin' by recruiting Lupe Fiasco. 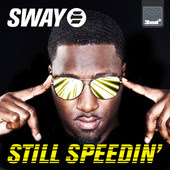 Derek Safo (aka Sway), the north London rapper has been in the game since the age of 16 and is credited by peers and critics a-like as a trailblazer in the UK urban scene, he also appeared on the classic Harvey Nicks - The Mitchell Brothers ft. The Streets and Sway
and was the main support act for The Streets 2006 tour.

With the very welcome return of Mike Skinner ( The D.O.T ) on Twitter this week, Sway put a nice tweet out to Skinner yesterday saying
@skinnermike Mate you're back!!! Glad to see you on my timeline again. #LivingLegend

Still Speedin’ samples Loleatta Holloway’s ‘Love Sensation’, which was made famous by Black Box who sampled it on their 1989 number 1 ‘Ride On Time’. Sway goes in on the track with his signature lyrical word-play, demonstrating his prowess with some serious punchlines.

Still Speedin' is released on December 4th and you can pre-order on iTunes here : http://bit.ly/stillspeedin