Ever the innovator, the master of fresh idea's, Mike Skinner makes music history with a live interactive video featuring Ghostpoet and The D.O.T on Rizlab's The Project. 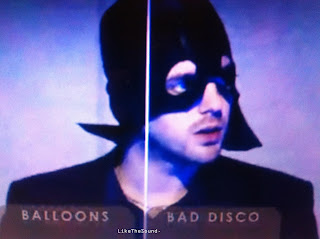 
I'm proud to say I took part in the real time multiple choice options, deciding what would happen next in each exciting scene to the three unsuspecting artists in this exclusive to Rizlab The Project 3 video conducted on 30th November, when Mike Skinner and Robert Harvey's new band The D.O.T combined creative forces with highly credible London talent Ghostpoet - whose debut album ‘Peanut Butter Blues and Melancholy Jam’ has earned him an enormous amount of respect as well as a Mercury Prize nomination, - to record the worlds first live interactive music video.
20,122 viewers, 32 possibilities, one live performance and one live take. The end result is delightfully amusing, check out Mike's expressions when a tattooed disco dancer flexes his ample bicep muscles in his face! joined with fast-pace scenes of Cheerleaders, Stonehenge attire, 'Boyband' boys flexing their bare toned torso's and plenty more fun and frolics fired at the threesome as they battle through the creative elements, whilst performing the bodacious new track 'Trouble' which is already proving a favourite around the clubs, well-received by DJ's and fans of both Ghostpoet and The D.O.T. are continously leaving positive feedback to boot.
Ghostpoet + The D.O.T Rizlab for 'Trouble'


Video courtesy of Rizlab Project 3. Watch this video on www.rizlab.co.uk
~*~