With The Streets final album Computers and Blues out today! The interactive video you are about to watch is the most innovative introduction to an album I have ever seen and it is so typical of Mike Skinner to create something this detailed, clever and intricate for his fans.

The Interactive film will introduce you to The Streets new album of the same name - Computers and Blues. The songs are of an exceptional standard, Mike Skinner is an extremely creative and talented individual, he worked hard on this album and it has paid off. To say the least I feel so proud of what he has achieved. 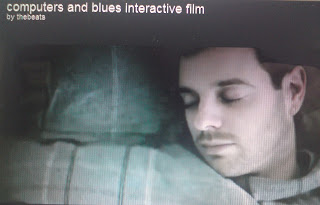 The first video offers you three options, each of which then goes on to unfold further stories from which you decide Mike and his friends fate. I have to admit, on first viewing, my devious side took the upper hand and I did unkind things - which of course I would never do in real life.

The sound quality in these recordings are excellent, the clarity of every movement can be heard crystal clear, the rattle of the Doritos bags, the sound of Skinner's bare feet padding on the wooden floor, the knife and fork clattering into the plate - the sound is beautifully loud - I love loud and clear - I'm sure there is a technical term for what I'm referring to but unfortunately I don't know it, if you do - please post in the comments box below.
My sister and I were big fans of those late BBC2 and Channel 4 short films they used to run that we'd stay up late to watch, they also used those wonderful overly loud sounds for every day noises we take for granted such as water pouring from a tap or the seals losing suction as you pull open the fridge door. Outstanding work from Mike Skinner (Starring) Beat Stevie (Director) and Ted Mayhem (Producer)

With each different scenario in the Computers and Blues interactive film, comes a fact of life, for instance when I took the option to take Mike in the football match without Ted because Mike had forgot Ted's ticket, my actions caused Ted to get beaten up in the street on his way home, where if I had opted for Mike to buy him a ticket, they both could have enjoyed the game = happy ending.

The Computers and Blues interactive film is genius, it really is. I'm fascinated by the effort that must have gone into the making of it.

Play it and get obsessed.