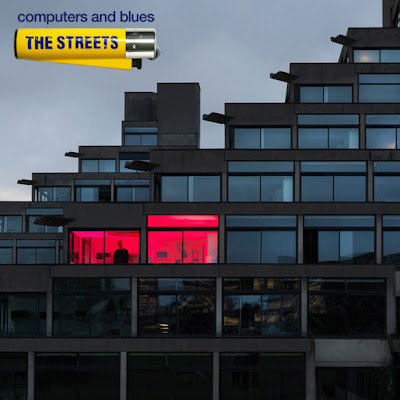 The quiet before the storm emits cool glassy tones surrounding the brightly lit rose enhanced room in which Mike Skinner stands - he is probably contemplating his next plan of action after The Streets.
This album cover is instantly a very memorable picture, it stays in your mind after just one glance and it is an appropriate subject because the Norwich U.E.A Campus is where The Streets will be performing live on 28th February during the first leg of the Computers and Blues 2011 Tour

Like the reflections on the glass the photograph reflects a feeling of Déjà vu and I love it for that because it is taking us back to the elements of Original Pirate Material - moving on full circle to the modern day, and this is how I see the future for The Streets - forever evolving. Computers and Blues may well be the final Streets album but The Streets music will stay relevant and as we grow wiser, somehow what skinner has been saying will make even more sense.
Each of the five Streets albums will be an open door for a new generation and from each incredible burger-bar cocky clever, funny, sensitive genius, philosophical and very intelligent album - Original Pirate Material , A Grand Don't Come For Free , The Hardest Way To Make An Easy Living , Everything Is Borrowed and Computers and Blues there is a story, a moral and a lesson that we have either already lived and empathise with or are yet to be lived and learned. Where some artists music stagnates past it's sell by date, nearly10 years on from the debut Original Pirate Material, Mike Skinners lyrics stand out peerless, raw and pure.

From Luxemburg's 'Towering Inferno' for Original Pirate Material, the new Architecture for Computers and Blues is cool, obscure and smooth with a welcoming warm glow beckoning the Outside Inside.

I'm very much looking forward to see the rest of the Artwork for the inlays/booklet.