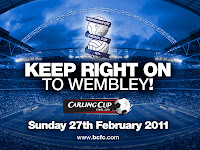 Sunday 27th February saw the success of Birmingham City receiving it's 1st piece of Silverware for their club since 1963 after Birmingham scored 2 against Arsenal 1 at Wembley.
Arsenal had to watch their six year quest for the trophy fade into a dream as the blues dramatically beat off the Gunners.

As the roar of GOOAAL!!!! spread across the nation, one Birmingham City fan was so elated he broke his 20 days Twitter absence after he had officially ***Closed*** any communications as The Streets other than The Streets Computers and Blues tour of which is live in action as I write. The Streets AKA Mike Skinner AKA @skinnermike gave his fans a glorious kick into action after he tweeted at 6.06pm UP THE FUCKING BLUES !
It was great to see Mike tweet again and I hope he will return to Twitter on a regular basis.
Watch Birmingham City Carling Cup verdict and soak up the reactions Here on BCFC.com

And check out this selection of TV when the Blues overcame Arsenal and won the Carling Cup Here on BCFC.com

The Streets Computers and Blues concert dates remaining so far are ...

Saturday 11 to Sunday 12 June 2011
Northside Festival 2011
Band of Horses, White Lies, The Streets, Thomas Dybdahl, Tina Dickow, Turboweekend, The Floor Is Made Of Lava, and De Eneste To Tickets

Buy The Streets Computers and Blues on iTunes