The AA's - Fever
The AA's (African Alliance) is a collective of rappers, producers and young entrepreneurs based in Manchester, UK. They released their first single, off The Emergence experiment mixtape, Hustlaz anthem in late 2007 which was widely received in the UK Urban underground scene.
The AA's new single Fever is doing very well on the radio and has just reached number 2 in the Peacefm 90.1 Chart.
Fever is the first single from their upcoming album, The emergence.

If you enjoyed that and would like to see The AA's at number 1 in The Peacefm chart, You can help push things forward for The AA's by emailing
The AA's fever to sambrownjoint@hotmail.com 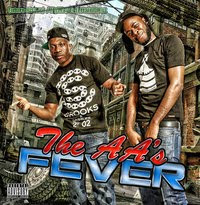 Email ThisBlogThis!Share to TwitterShare to FacebookShare to Pinterest
Labels: Fever, Peacefm, Stal-yon B Super, The AA's, The emergence