Day 4
Mike Skinner AKA The Streets - Appreciation Week. Day 4.
Mike Skinner quotes
One of the things I really love about Mike Skinner is his ability to word the things we think but never seem able to say in an identifiable way. Mike is a deep thinker and a sensitive soul who can say things that will stay with you for the rest of your life - he is also a cheeky chap who can render you in fits of laughter.
Here are a few Mike Skinner quotes I love to love.
"A LIKKLE PIECE FAT OFF"
It means "a little bit amazing" 2009
~~~~~

"When the shadows in the sun grow long,

We listen to a slow, slow song"
Slow Songs

~~~~~
Grant Stoddard for Nerve.com "Have you noticed a massive change in the way you interact with girls since becoming successful?"
"Not just girls - boys too. Let's not discriminate. People listen to a lot more of what you're saying. That's the interesting thing, and it's quite enjoyable. Being listened to feels good." 2003
~~~~~

~~~~~
"Dinner with Skinner" This became a classic occurrence during The Streets 2009 tours. 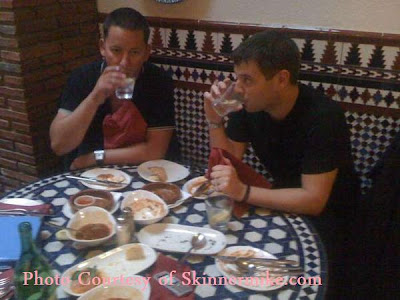 Magic Mike Millrain and Mike Skinner
~~~~~
"Why are the notes I take during daily life, so ineligible when I come to try to use them?"
Twitter March 2009
~~~~~
"I came to this world with nothing
and I leave with nothing but love
everything else is just borrowed"
Everything Is Borrowed
~~~~~

~~~~~
"If I was on mastermind my specialist subject would be STUDIO MICROPHONES 1947-2008"
Twitter January 2009
~~~~~
"writing doesn't always get written in the place it is written about. the opposites can flower the most amazing contradictions."
Skinnermike.com Aug 2009
~~~~~
Chris Parkin for Timeout.com
"Anything that needs to change in London?"
"The whole world’s one big organism, really, so it’s almost a bit xenophobic to start saying London needs that, London needs this. I think London does pretty fucking well. It’s a great place to live. I selfishly live here because I find the culture really happening, the art scene, the music scene. You can see any band in the world here. It’s happening, it really is."
~~~~~
"All stare, eyes glazed
Garage burnt down, the fire raged
For 40 days and in 40 ways
But through the blaze they see it fade
The sea of black, the beaming heat on their faces
Then a figure emerges from the wastage
Eyes transfixed with a piercing gaze
One hand clutching a sword raised to the sky
They wonder how, they wonder why
The sky turns white, it all becomes clear
They felt lifted from their fears
They shed tears in the light
After 6 dark years
Young bold soldiers, the fire burns
Cracks and smolders
Five years older and wiser
The fires are burning on fire, never tire
Slay warriors in the forests and on higher
We sing, hear the strings rising
The war's over, the bells ring
Memories fading, soldiers slaying
Looks like geezers raving"
Turn The Page
~~~~~
"Make yourself miserable or make yourself strong- it takes the same amount of enegy"
Twitter February 2009
~~~~~
"For billions of years since the outset of time
Every single one of your ancestors has survived
Every single person on your mum and dad's side
Successfully looked after and passed on to you life.
What are the chances of that, like?
It comes to me once in a while
And everywhere I tell folk it gets the best smile".
On The Edge Of A Cliff

Thank you for sharing so many of your thoughts, your wisdom and humour Mike Skinner.