Intro have been celebrating its 20th anniversary, between November and February they focused on numerous intimate concerts. In the first weekend of March, they are celebrating the magazine’s birthday with two spectacular indoor festivals in Berlin and Cologne. 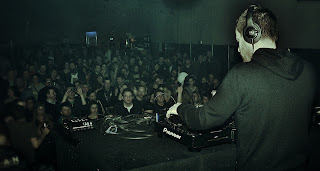 Last night saw Mike Skinner's DJ Set in Berlin - others billed included Maxïmo Park, M83, Thees Uhlmann, Mouse On Mars, Simian Mobile Disco, Little Boots and Matias Aguayo.
Mike Skinner blogged this morning "
have never DJ’d 2 nights in a row before. it’s like eating loads of crackers. diplo does it but he’s testament to the fact that sanity is just madness put to good use" on www.mikeskinner.so

I was very pleased to get so many favourite tunes in one set, Strong Skunk, Single Barrel, Has It Come To This, Bada Bing, Blinded By The Lights, the set is drenched with heavy beats, sour house,  and sounds like a lot of thought went into the planning and you don't feel like you have to worry about the DJ, the flow is exciting and sexy. Well done Mike Skinner for a much enjoyed and very lively DJ set. I can't wait for the next one ... some Bee Gees by any chance please?