With Kid British Moho Live Manchester date just six days away, what better time to nab Simeon Mclean for an EXCLUSIVE to Like The Sound interview. 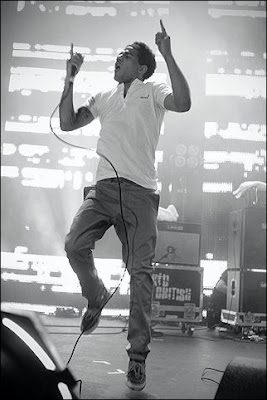 Pic : Simeon live @ itunes festival 2009
Hi, lets begin by getting the formalities out of the way, What is your name?
Simeon : Simeon Mclean

What do you do for Kid British?
Simeon : I'm a vocalist and one of the song writers in KB

What is your proudest moment of 2009 so far?
Simeon : Probably doing our album launch at HMV Manchester to a packed room. It feels good to know that you have got strong support from your home town.

Who is big in your game right now?
Simeon : At the moment probably Dizzy Rascal.. That guy just keeps getting better and better. The Courteeners are doing really well on the live scene also.

Our House Is Dadless is the third single to be taken from your debut album It Was This Or Football, will there be a fourth single to come from it? and what will it be?
Simeon : Well Our House Is Dadless is really classed as our first single as the others were just put out as limited edition singles.. only a limited number of them got produced so you never know we might re release one of them or surprise you all with another. Rest assured that whatever the song is it will be good.

The law is about to change. A defendant usually has the right to know who his or her accusers are, soon this will no longer be the case for defendants aged 11-30 charged with murder or manslaughter in English courts. In your opinion, is it right to use anonymous witnesses?
Simeon : Yeah i think that's fair. Does it really make a difference whether the defendants gets to see the accusers or not? I believe that the new law will make it safer for the accuser.

If you wasn't in Kid British, what would you be doing now?
Simeon : I was a fire fighter before KB really took off properly so id probably be fighting some fire somewhere or doing home fire safety checks ( Very boring but very necessary) LOL

Wow, I never knew that!
Simeon : Yea! I had to leave the fire service for the band. I was only in there for about 7 months so I hadn't grown attached yet :)


V festival virgins aren't you? So how did that go at the weekend?
Simeon : Yeah its the first time we've played V so we all lost our virginity's this weekend. We wont regret it as it was done out of love ha ha! It was an amazing experience, we played to a full tent at both sites which is a very promising sign of how things are going.

Who is your biggest influence?
Simeon : My mum and Heartless Crew ha ha

From this moment in time, what's next for Kid British
Simeon : We do a University tour that starts in Oct through to Sept so we're just looking forward to that. The 2nd half of our album plus a 2nd single should be out soon also so keep your ears wax free and your eyes open O_O

Thank you for your time Simeon, great interview and eyes wide open ;)

It was this or football available from itunes click here